I recently performed the wedding ceremony music for a lovely couple in The Spanish Chapel located at The South Florida Museum in Bradenton, Florida. For this wedding ceremony performance, the idea was to fill the chapel with music from the Spanish Guitar repertoire. I began by playing prelude music composed by Francisco Tarrega. His short preludes such as Lagrima and Adelita worked perfectly to relax the wedding guests while they anticipated the arrival of the wedding party. This particular wedding venue had perfect acoustics for the classical guitar. It was a pleasure to feel the natural sound of the instrument supported by the acoustical design of the room.

I continued playing music with a Spanish feel for the rest of the wedding ceremony. A favorite piece “Romanza,” well known for its beautiful melody, fit perfectly in the chapel, which is designed to evoke memories of the time when Spanish explorers landed in the New World.

In order to segue to the bride’s processional I composed a wedding fanfare in the key of D Major. I used open chord fingerings contrasted with low bass notes in a rapid strumming fashion which cued the wedding guests to stand for the entrance of the bride. I continued with Canon in D by Johann Pachelbel throughout the wedding processional until the bride reached the altar and the wedding service began. 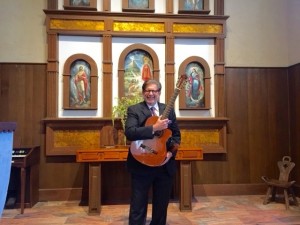